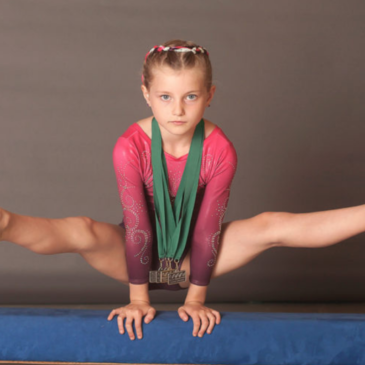 Do you ever meet someone and right away want to learn so much about them and from them? This is was the case for me with Shannon Jones. I first met Shannon at a fundraiser for Winnipeg youth from the inner city about five years ago via her husband Miles, and a long-time friend from the University of Manitoba ‘Arts’ degree days. She just had a vibe about her that resonated with me. We became friends on social media soon thereafter and that vibe has rung so true. Shannon is a strong, kind, loving soul of a human being doing an exceptional job raising her three young girls. In this week’s blog we wanted to feature Shannon to spread the word about her incredible story.

Shannon grew up as a competitive gymnast, and it gave her the very happiest moments of her childhood. The gym was her second home, providing a source of stability that was lacking at home. After retiring from gymnastics she missed the exercise, building a strong body and mind, and as she says, “burning off the crazy!”. As past national and international level athletes, we absolutely positively can relate!

Shannon tried a few things to invigorate her fitness love again, but it took some time. At the age of 38 she tried CrossFit for the first time and has never looked back. It’s proven to be exactly what she needs as both a physical and emotional outlet for this mom of three. Keeping up with the Jones’ is no easy task. Their three girls, London (11 years), Hartley (9) and Parker (4) are all super busy and beyond motivated. London is often reluctant to try new things, but with a little prodding she always finds something to love in every activity! She plays hockey and trains CrossFit, loves going to camp, and wants to study to be an Architect.

Hartley is a force to be reckoned with! She is strong, intense, self-motivated, and fiercely determined in all that she does. She is a competitive gymnast, has been selected for the High Performance training path, and confidently tells them to start saving our money for the LA 2028 Olympics, “because you definitely have to come watch my first Olympics!!”

Parker is 4 affectionately nicknamed BammBamm. She is ridiculously strong, and not at all concerned with being delicate! Parker loves to swim, and bounce on the trampoline, and do just about anything active! Last year, Parker was diagnosed with Autism with Language Impairment, which clarified a lot of issues, but also made clear that structured sport is likely not in the cards for her. However, through the amazing people and programs at the Canucks Autism Network, she has since started to learn to participate in swimming and skating, albeit on her own terms.

As both former athletes themselves, Shannon and Miles were very clear on wanting to have their girls experience as many sports as possible growing up. They felt so many tremendous benefits from a life with sport, and wanted to ensure they gave their girls the same opportunities for growth, strength and confidence they received. With London playing hockey, it has at times been a struggle playing on co-ed teams, not because of unfair treatment more so regarding an unfair culture. Girls being ‘tolerated’ rather than accepted, in turn making it difficult to develop a sense of a sport community for the young girls.

“We believe that sport participation is just as important for kids as school. Through training and competition they learn so much more than just a game; they learn to set short- and long-term goals; to be a great teammate; to manage their feelings in the face of both success and defeat; to be proud of their effort first, results second; to develop a healthy relationship with their Coaches; and most importantly, that at all stages success is earned, never an entitlement,” says Jones. It hasn’t been an easy road for the family. Together they have faced a housing disaster, multiple life-threatening illnesses, uprooting to move across the country, Shannon’s medical retirement, and now trying to help their littlest to develop. Building resilience was the only response to it all while remaining honest about life. That it is not easy, it is not fair, and it is not predictable, but they can lean into each other and rise above it. Shannon often says ‘life is hard, love it easy’ and that rings in my ear every time I personally face any challenge.

The strength of their family runs deep in their veins. Hartley was diagnosed with Epilepsy as a baby, and has been through hell and back…and back again. From the endless medical procedures to the mind-numbing medications, this nine-year old is a pint-size super hero. But that along with her fierce love for gymnastics has made her set goals, crush them and set new ones often. Couldn’t we all just put her in our pockets as a reminder to be such a badass?

The Jones family moved from Winnipeg to Kelowna for a host of reasons two years ago. While they miss so much about Winnipeg, it has been a great move. When they arrived 2 years ago, Hartley required so much medication that she was unable to complete a full day of school, and was not developing academically. By changing their lifestyle, her treatments, and their surroundings, this child is now thriving academically, is medication-free, and is training in a national gymnastics development program. I’m sure they would have moved to Mars for results like this if they had to! Because THAT is what love and family are all about. Sticking together, rising above, and doing it with endless love and dedication in your heart.

I asked Shannon what her biggest dream for her girls is. It’s a tough question to pose to any parent, but she nailed it. “Honestly, that they truly know that they are loved. If we get that right, the rest will be easy.”

One thought on “Shannon Jones – Our Summer Inspiration”