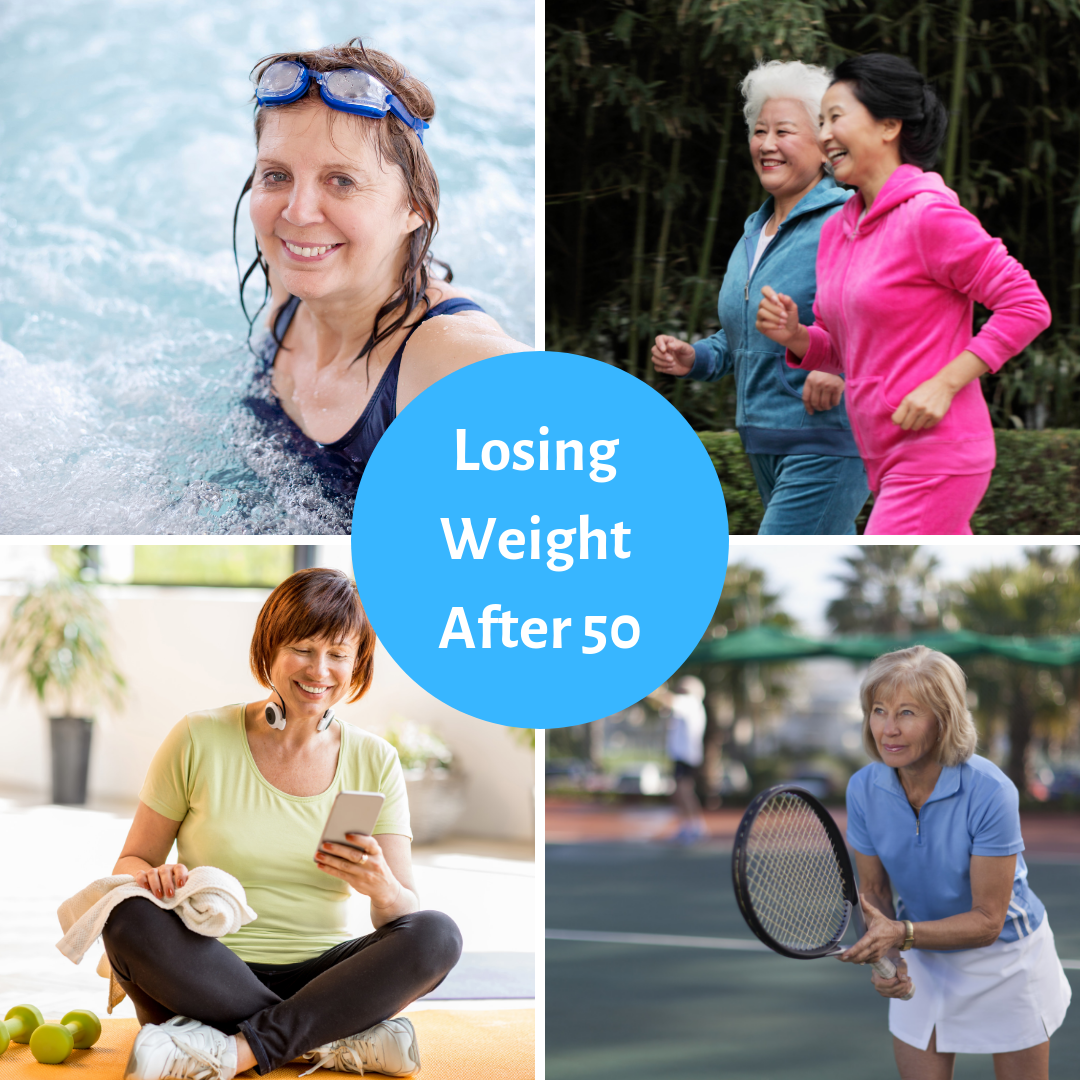 It may seem like as you get older, losing weight gets increasingly difficult. It’s easy to blame our age or slower metabolisms as to why we aren’t looking or feeling as good as we want. Well unfortunately this is no longer a good excuse. Even though your metabolism may have slowed down, your weight gain is mostly due to being less active and having muscle loss. Fortunately, these are two things we can do something about.

Do we have the time and energy to work out as much as we did when we were in our 20s? Ummm no. Those were the days when we didn’t have kids, weren’t in the thick of our careers and had much more free time.

But now that we are in our 40s and 50s, we have to make our health a priority. We have to carve out time and pay attention. We have to set goals and get to work.

Here are a few things to do to help you be successful in achieving your fitness or weight loss goals:

Just because you haven’t made yourself a priority in the past, doesn’t mean it has to stay this way. You are worth the effort.

If you enjoyed this blog, you’ll love our newsletter! Sign up here for great information about health and welless for YOU! Like an aftershock from the 2016 Olympic Games in Rio, our Manitoban women rowers are killing it!

I, like most sport-minded women in this great country, were overwhelmed with pride by the achievements of our Canadian women at the recent Olympic Games.  What made me even more excited was all of the media covered (although sometimes gender-biased) of the female athletes. So now that the flame has gone out in Rio, I’m trying to continue to shed light on some amazing recent success of female athletes in our own backyard.

What is so incredible is that this success comes from our “female” athletes.  What’s even more amazing is that the two most decorated athletes have been rowing for less than a year! To me, this shows two things: an overall “physically literate” athlete can have success in nearly any sport and the coaching in the Manitoba program is second to none.

At only 18 years old and rowing less than a year, Emma Gray took home Women’s Open single scull Silver Medal and a Gold medal in the Women’s U23 and Women’s Junior categories. Rianne Boekhorst, 22 years, who has only been rowing for remarkable 7 months, placed 13th!

Placing 7th was the pair of Casie and Kaelyn Gauthier, 23 and 24 years. This placement was higher than two international crews in the Women’s Open pair.

In the National Canadian Cup, Manitoba won the silver medal and was only .50 seconds short of the gold!

All of the above results are the best Manitoba has ever achieved. In such, this shows that the Manitoba Rowing Association program and structure, led by Head Coach Antony Patterson, is the most efficient in the country.

Patterson is beyond proud and excited about this success. “To shed some light of the greatness of this achievement by Manitoba Rowers… We achieved these incredible results against Olympic and world gold medalists in the most successful summer Olympic Canadian sport in history.  In my 30 years of international coaching I have come to realize the shear gravity of these accomplishments. I am finding it hard to compare this fantastic result to other results. I believe if this isn’t the best result including my 5 Olympics as a coach it would be a very close second.”

To learn more about these athletes and other Manitoba Rowers and their accomplishments, please read these:

Check out more of the media coverage Fit Communications was able to secure for Manitoba Rowing here! In the 90’s we wanted no butt. In the 2000’s we wanted a bit more shape. In 2016 it seems that people will go to any lengths to increase the size of their booty. But there is more than just having a great butt than simply aesthetics. It’s actually really important for your body’s overall health and injury prevention. Many North Americans sit all day in front of a computer screen, and when doing so, you turn off your butt muscles. These muscles consist of the glute maximum, glute medius, and glute minimus. There are four major benefits to working out these muscles groups:

Now that we know why it is important, here are a few great workout routines you can do anywhere to strengthen all three parts to your glutes:

Try to do the following routine without a break in between exercises. For added difficulty, add weights:

If you enjoyed this blog, please share it with your friends on social media and sign up for our newsletter here! Every day I wake up and tell myself three things that I am excited about, am looking forward to, or make me happy. This can include the little things like planting my summer garden to having a fun night out with friends to all the great things we are up to with Fit Communications. One thing that constantly comes up in my list is my time at the gym. I crave it. I need it. It makes me so happy to have such a healthy habit part of my life every day. So this week’s blog I thought I would share my Ten Reasons to LOVE the Gym.

If you’ve enjoyed this blog, let us know! We would love to hear your favorite reason for working out in the comments below. Or to read more blogs on sport, follow this link – http://fitcommunications.ca/category/sport/

Each Girl Matters.
Because girls consistently report that social connection and role modeling are important factors in sport participation, as more girls drop out, the remaining girls have fewer friends to play with and fewer opportunities for competition. This diminishes the quality of the remaining girls’ experiences and increases the likelihood that they will leave too. ... See MoreSee Less

1 in 4 girls whose participation was negatively impacted by COVID-19 are not committed to resuming their pre- pandemic sport participation levels post COVID-19. ... See MoreSee Less

Canadian Women and Sport came out with a new research document that shows 1 in 4 girls do NOT plan to return to sport after Covid. This has MASSIVE impacts. We are going to be sharing a few highlights of this Report this week. For full information, please see here:

This is huge and breaks my heart. I’m not surprised sadly. Thank you for sharing. I intend to share within my circles of community sport.

Great way to start the day!